Contact: Sophia Falke for more information & to schedule an interview with Charles Clotfelter

ANNOUNCING PUBLICATION OF A
GROUNDBREAKING DOCUMENTARY INTO

The HOWARD HUGHES HOAX:
CON MEN, CORRUPTION and the FAKE BURIAL of a BILLIONAIRE

THE CONTINUING INVESTIGATION INTO

The Truth about Howard Hughes and Those Who Betrayed Him

A Documentary by Charles R. Clotfelter 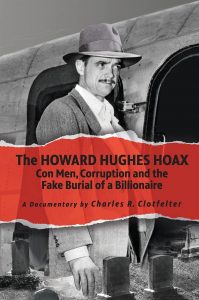 Henderson, NV. Author Charles Clotfelter announces the publication of his groundbreaking expose on the elaborate and illegal con that was perpetrated by those in the Howard Hughes Company’s inner circle plus evidence that Howard Hughes died in 1965, eleven years before his alleged death in 1976.

The Howard Hughes Hoax reveals how Howard Hughes’s inner circle of trusted associates used lies, deceit, intrigue, conspiracy, and false propaganda to defraud the Howard Hughes company of millions of dollars and sully the name of an honorable man.

In 1964, Howard Hughes told 24-year-old Charles Clotfelter that, “Because of the collapsing vertebrae, the top part of my body is now crushing my internal organs, and eventually they will cease to function. The doctors have only given me eight months to live.”

Yet the official date for Howard Hughes’s death was 1976. Which is the truth?

“I wrote The Howard Hughes Hoax because I want to repay Hughes’s kindness to me when in 1964, he picked me up as I was hitchhiking in Mexico, desperately trying to get home because I was so sick. We spent two days together, during which Hughes shared not only information on his declining health and imminent death, but also his philosophy on life.”

The Howard Hughes Hoax is the culmination of years of investigation and data gathering which exposes the unspeakable deception perpetrated by Hughes’s corrupt, deceitful inner circle of high-level employees and restores Howard R. Hughes’s legacy and good name. 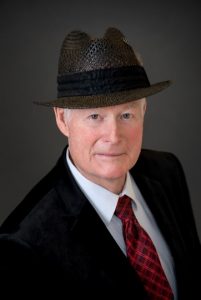 Charles R. Clotfelter was born into a military family and traveled frequently in his younger years, including Naval bases from Bremerton, WA, to San Diego, CA, Albuquerque, NM and Yorktown, VA. Finally Charles and his brother were placed in the Augusta Military Academy in Fort Defiance, VA. After graduation, wanderlust became a way of life for Charles, including California, Utah, Florida, the Bahamas, Mexico, Oklahoma, New York, and Hawaii.

It was in the small town of Ciudad Hidalgo, Mexico, bordering Guatemala, where Charles met Howard Hughes, and the seeds were planted for the documentary book, The Howard Hughes Hoax: Con Men, Corruption and the Fake Burial of a Billionaire.

Now, almost 60 years later, Charles Clotfelter has uncovered evidence to support his assertion that Howard Hughes died in 1965, eleven years before his alleged death in 1976, and that an elaborate and illegal con was perpetrated by certain members of the Howard Hughes Industries’ inner circle.

From the Forward of
The Howard Hughes Hoax: Con Men, Corruption and the Fake Burial of a Billionaire

“This book is mainly about a man named Howard Robard Hughes, Jr. – a man who did not seek to subjugate others or to deprive them of their substance in any way. He was simply a man with great ideas and a bit of wealth with which to bring them to fruition. His companies became pioneers in the movie industry, aeronautics, electronics, and military weaponry. Within the pages of this book you will learn the true greatness of a man who oversaw an empire which generated massive employment for many thousands of people. He was a fair and honorable man, mostly admired and willingly worked for. The portrayals of a Hughes who became a drug addicted, xenophobic recluse are totally false! This misleading and abusive publicity surfaced only after 1965 – the year in which he actually died. This adverse propaganda about Hughes was necessary so his once trusted inner-circle and their minions could steal what was not rightfully theirs.

IS WHAT THE HOWARD HUGHES HOAX CLAIMS TRUE? HERE’S WHAT THE EXPERTS SAY.

“I do not profess to be expert in all the medical arts. However, in consideration of my knowledge of endocrinology (toxicology), it appears to me that the lab-tests, evident in Mr. Clotfelter’s book The Howard Hughes Hoax, are not indicative of renal failure being the sole cause of death of the corpse, believed to be “Howard Hughes,” autopsied at the Methodist Hospital, Houston, Texas, in 1976.

Furthermore, it was apparent to me, as it would be to most in the medical arts, that the destruction of the ribcage, breastplate, clavicle, and spinal bone tissues (as described in numerous news articles concerning Howard Hughes and his 1946 XF-11 test plane crash into Beverly Hills, CA) could not have healed to the extent of being non-evidential in the Methodist Hospital “HH” corpse autopsied 30 years later.”

An impressive compilation of supporting exhibits…

“The thesis begins too fantastic to be true. The implausible begins to appear possible, then even probable. An impressive compilation of supporting exhibits makes a compelling case.”

Captures the essence of conspiracy…

“As a follow-up to his earlier work (The Price of Their Souls), Mr. Clotfelter’s exquisitely researched work (The Howard Hughes Hoax) captures the essence of conspiracy to mislead the public and camouflage the truth about Howard Hughes’s death. In doing so, Mr. Clotfelter unfurls a treasure trove of background material which makes his analysis and conclusions both thought provoking and compelling.”

More cause for DNA testing could be argued…

“As far as insights into the medical side of Mr. Hughes’s life, I have one major remark. Pathological evidence of identity usually would have to pertain to the skeletal system. His collarbone fracture, regardless of surgery or close reduced, would leave evidence. If an ex-ray of the remains depicted a healed or unhealed fracture, identity could be confirmed. If the collarbone appears anatomic (without irregularity), more cause for DNA testing could be argued.”