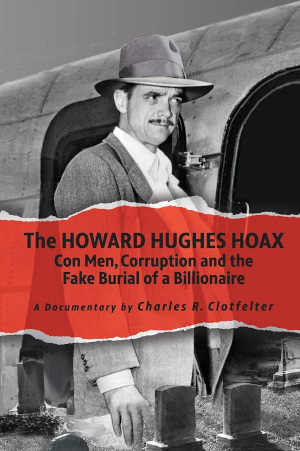 In 1964, a sick young man named Charles was hitchhiking in Mexico while trying to return to the United States. A man named Howard picked him up. Charles Clotfelter, the author of this book, was 24 years old when that kind stranger offered him a ride. But what he didn’t realize in his time of need was the true identity of that the kind man who helped him. It was none other than the legendary Howard Hughes.

During their two days together, Clotfelter had open and honest conversations with Howard Hughes, during which he discovered Hughes’s belief that he would die within the year because of injuries he had suffered from the 1946 crashing of his plane in Beverly Hills, California.

“Because of the collapsing vertebrae, the top part of my body is now crushing my internal organs, and eventually they will cease to function. The doctors have only given me eight months to live.”

Clotfelter found Hughes a compassionate man, willing to help a stranded young stranger. He believes Hughes’s act of kindness in 1964 may have saved his life. Based on what Hughes shared with Clotfelter during their two days together, Clotfelter believes – and proves in this book – that what is said about Howard Hughes from 1965 to 1976 is based on lies and deceit.

Because Howard Hughes died in 1965, not the official year of 1976. And Clotfelter offers proof in this documentary book.

Why did Charles Clotfelter spend years researching and then writing The Howard Hughes Hoax?

“I wrote The Howard Hughes Hoax because I want to repay Hughes’s kindness to me when, in 1964, he picked me up as I was hitchhiking in Mexico desperately trying to get home because I was so sick. We spent two days together, during which Hughes shared not only information on his declining health and imminent death, but also his philosophy on life.”
~Charles Clotfelter

The Howard Hughes Hoax is the culmination of years of investigation and data gathering which exposes the unspeakable deception perpetrated by Hughes’s corrupt, deceitful inner circle of high-level employees and restores Howard R. Hughes’s legacy and good name.

From the Forward of The Howard Hughes Hoax: Con Men, Corruption and the Fake Burial of a Billionaire

“This book is mainly about a man named Howard Robard Hughes, Jr. – a man who did not seek to subjugate others or to deprive them of their substance in any way. He was simply a man with great ideas and a bit of wealth with which to bring them to fruition. His companies became pioneers in the movie industry, aeronautics, electronics, and military weaponry. Within the pages of this book you will learn the true greatness of a man who oversaw an empire which generated massive employment for many thousands of people. He was a fair and honorable man, mostly admired and willingly worked for. The portrayals of a Hughes who became a drug addicted, xenophobic recluse are totally false! This misleading and abusive publicity surfaced only after 1965 – the year in which he actually died. This adverse propaganda about Hughes was necessary so his once trusted inner-circle and their minions could steal what was not rightfully theirs.